It was June of 1957 when the young Ensign was introduced to the Beech T-34B at NAAS Saufley Field north of Pensacola. The Primary Stage was an introduction to the very basics, but they made sure you had your fill of spins, and elementary acrobatics. Soloing after 8 hours, it seemed that in no time, 40 hrs had been accumulated and it was off to NAAS Corry Field to fly the legendary North American SNJ-5.

Following NAAS Saufley Field and the T-34B, it was off to fly the SNJ-5 at NAAS Corry Field. It was a might bit more difficult to muscle around the sky, but when mastered, it was FUN! The love of a life-time was beginning. The USCG journey was over all-to-soon and ended as Commanding Officer of the CGAS Cape Cod.   But that did not diminish the love of flight and that continued to this day in a number of exciting birds, and it whetted his appetite for telling his story, and that of others in the fraternity, through the media of the written word.

The family King Air 350 gives him a chance to "Hold down the right seat cushion" and enjoy the realm of the higher speed and medium altitude flight.
The aircraft is based in Savannah, GA and since I have moved to Bluffton SC chances of getting back aboard are diminishing.
Additionally, the ship underwent a major glass cockpit update and two engine performance upgrade at Stephens Aviation. Would need schooling to figure out functionality! 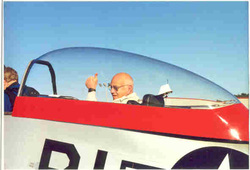 A once-in-a-lifetime chance to enjoy the sounds and fury of the legendary P-51! Bob Jepson's TF-51D "Diamondback".
There is no sound like that of a 1700 HP Merlin engine purring a few feet away in the nose of the aircraft. Controls are wonderfully harmonized and smooth acrobatics are possible with even the most ham-handed pilot trying for the first time.
Torgue on take off as you ease up to 61" manifold pressure, and high approach speed are phenomona to get used to.